There was a Taiwanese movie "Warriors of the Rainbow: Seediq Bale" which I've been keen on watching  since 2011 when I was still in Canada. Some day, I accidentally found the movie which I wanted to see. There is an international film festival called Fantasia which is taking place from July 19 to August 9. After looking for the info on the movie, I prepared myself hurry scurry and invited my boyfriend to join me. 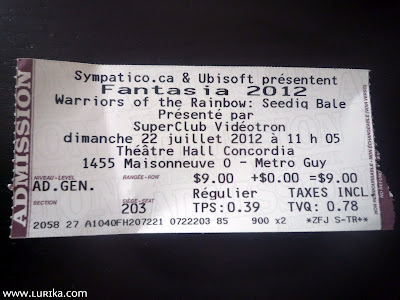 { The movie has four hours and a half long. I only paid 9 dollars which was a very good deal:) }

I didn't expect that many people would be interested in this movie. However, when I arrived to the theater, there was a line up already. Not to mention the day was Sunday and the playing time of the movie was pretty early in the morning. On the other hand, I was happy to see a movie from my country getting so much attention. 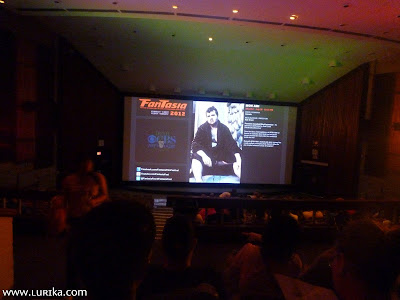 {The shot from the theater}

The movie is based on the history of Taiwan when China ceded Taiwan to Japan in 1895. Because of some misunderstanding between Taiwanese natives and a Japanese police officer, a cruel war erupted (Wikipedia-Seediq Bale ). Throughout the movie, I got to know the history of Taiwan when it was dominated by Japan, the culture of Taiwanese natives and was stunned by the fantastic mountain scenes in Taiwan. The movie made me sometimes cry, sometimes laugh, sometimes horrified by the blood and guts. After the movie finished playing, I saw many in the audience stand up and applaud wholeheartedly. My feeling was the same as a foreigner's who had lived abroad for ages and who saw a soccer team from his home country win the World Cup.

{The pamphlet of the festival}


For more info : Fantasia film festival
Click to watch the trailer of the movie: Warriors of the Rainbow: Seediq Bale