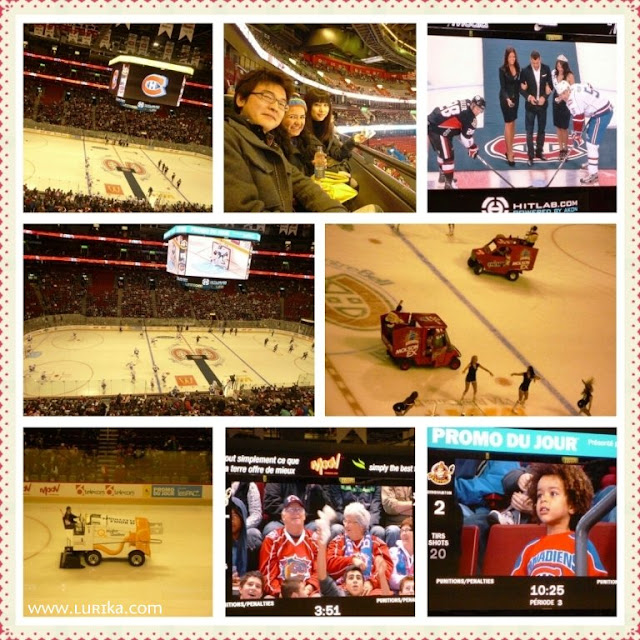 What's the most popular sport in Canada? Needless to say, it is hockey.

I went to Bell center with three friends. Before we found our seat, I bought a hot dog which was not only expensive (4 loonies) but also miserably tiny. Despite the fact that I felt I was ripped off by the undersized hot dog, it didn't kill my excitement for seeing the game. While I was waiting for the game to begin, I enjoyed the ambiance of the stadium, listening to the music and reading the colorful scrolling text marquee.

I didn't really know who those teams were, I just needed to know which team I was going to support, and make sure there were no other supporters against me. The game soon started, and my eye ball followed the puck the whole night long. My blood was flowing when I saw the team I was supporting hit the puck into the opponent's goal, I was screaming like a crazy. What a good spot for releasing stresses.

In the break time, there were some cheerleaders dancing, a couple of cars were shooting souvenirs into the audience and a couple of cute ice polish car were tiding up the ice floor. We could often see people on the screen. There was an unwritten rules which is, if a couple was seen on the screen, they had to kiss. So I saw an elder couple (see the picture in the middle above) kissed one another that was very cute.

Overall, although the game I went to watch was not a professional game, I was quite satisfied. Next time I go there I'm gonna buy a beer for getting even crazier.
Poster： Unknown 於 20:00 3 Comments

You might wonder why so many Taiwanese have an English name which is not their real name such as Andy Chen, Amy Liu, Maggie Kuo and so on. It may be because:
1)  It's easy to remember and pronounce for foreign colleagues, and avoids making them feel embarrassed to call us
2)  It sounds Westerner for those who like Westerner culture
3)  It helps protect their privacy
4)  It can be used as a nick name
5)  Their mandarin name sounds embarrassing
6)  Some other reason I cannot think of...

I didn't like my original name, which was given to me by my mother. The reason I didn't like it was that the name was too common and it was even ranked on the top 10 tackiest name in my country. I envied people who had a beautiful name that sounded wiser or more elegant. I asked my mom why she gave me this name. She answered that she was in a rush for registering my birth. The truth is always cruel. That's the reason I started using my English name.

I was using my English name until I noticed all my classmates were introducing themselves using their real name, besides some students who were from Taiwan, Hong Kong and Korea. Although some of their names were quite hard to pronounce, I did spent some time to practice them. In fact many friends of mine would rather use my real name than my English name. They explained that my real name meant the real me, and I was really touched by them who tried really hard to practice the correct sound of my name, therefore, I stopped using English name.

I always desire to try something new in my life, especially FOOD.
I invited my boyfriend for African food with impulsiveness. I looked on the Internet and found a restaurant which was chosen as the best African restaurant in Montreal by the Montreal Mirror in 2011. I didn't expect the ambiance of the place to be that classic and I was a bit worried about the price when I saw they put white linen on the table. We arrived there at 7:35pm and waited for half an hour to get the table. We got our food at 9pm in the end. I was thinking positively that good food always takes long to prepare.

The waiter gave us a warm towel to clean our hands because we were going to use them to eat without using any fork or knife. We ordered the combination dish A (which included veges, lamb, chicken, beef) for both of us. The food was all placed on a big silver plate. We needed to unwrap the bread to take the meat with our hands. Despite the taste was good at first, I got a bit bored of eating in the end because it was too heavy for me. Anyway, it was a good experience to try food I never tasted before in my life.