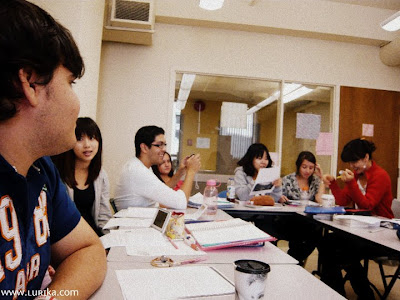 I was studying in a language school. Aside from learning English and French, I could also learn some other languages from those foreign students (like me). A bunch of students were speaking Spanish, Portuguese, Japanese, Korean... and so on. I noticed Japanese and Korean students learned Spanish with Latin students, likewise, Latin students learned those two Asian languages. I learned a few words of Spanish and Korean as well. We often start with bad words which everybody learn faster than polite words in every language. And people always took pleasure in teaching their language to others. However, I gave up learning Spanish, I still can't pronounce the double R sound perfectly, after practicing for half a year. Wait a second! why nobody wanted to learn Mandarin?!


To my surprise, many students I know in my school speak some other languages fluently. I knew a Brazilian girl who spoke Portuguese, English, French and understood Spanish, and a Korean girl who spoke Korean, Japanese, English and French. I heard my Korean friends said that apart from learning a first foreign language (usually English), they had to opt a second foreign language in high school, such as Japanese, Mandarin or French... and so forth. Indeed, many Korean students tend to take a gap year to study abroad to foster their global view when they are in university. What a highly competitive country.

Whereas, I was so ashamed of myself, and I wondered how I spent my teenage years. I told myself that I had to study hard but not for competing with those smart teenagers. I just simply wanted to get my English skills better and better, which was the reason I came here in the first place.
Poster： Unknown 於 19:27