The summer in Montreal 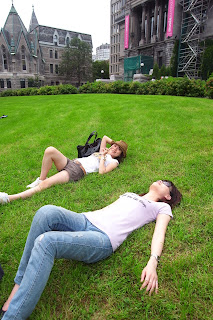 In spite of being from a tropical marine climate country, I felt the summer in Montreal was unspeakably hot. The outdoor temperature was occasionally up to more than 30 degrees and the sunlight was extremely strong as if I laid on the BBQ net. Likewise the indoor temperature was fierier than that, it always made me wonder if I was in an oven. Once, I tried to find the switch to turn on the air conditioner, and I found a button near the door of my room. Pressing it a few times, I thought it simply wasn't working, but it actually was the switch for the heat system. After that, I found out that there were neither an air conditioner nor a fan in the house. My mom told me that nobody stayed in the house in the summer because it was so hot that everybody was going out for a walk or to chat with the neighbors. 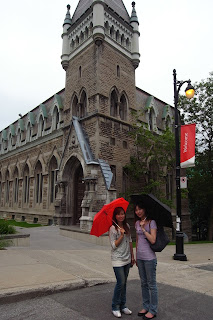 Even the metro stations, the metro cars and the buses had no air conditioner. Afterwards I understand why they don't. The summer is so short in Montreal, that it's not worth installing them.

People here grasped every chance to go out in the short summer. Girls dressed very sexy, with small vests and tight short pants being very common, and enjoyed to stay under the sun a lot to get a healthy suntan, whereas I put SPF 50 PA++ sun cream as much as I could to prevent my skin from becoming dark. In Taiwan, girls even carry the parasol (check the photo on the right) to avoid the sun shine. We have an idiom which says "A white complexion is powerful enough to hide three faults". The three faults include the face, the body shape and the bearing. Because of this idiom, you can find whitening ingredients added into most facial care products in Taiwan.